It really makes it looks like the English and the Spanish club are going after the forward this summer, but their story shows a very different scenario.

There’s a big doubt at Juventus regarding Dybala’s future at the club. The club are currently negotiating his new contract, and due to the pandemic, they’re having to use intermediaries instead of speaking directly to his staff.

It’s said Dybala wants €15m per season, and Juventus are trying to lower his demands by including some interesting bonuses in the deal. 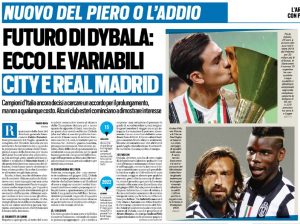 The striker’s current contract with Juventus expires in 2022, which is why the Old Lady want to solve the situation soon, as they could stay in a fragile position next summer.

Speaking of a possible sale, Tuttosport says Juventus continue to value Dybala at €100m. The other option is a swap, and that’s where the likes of Manchester City and Real Madrid are named.

They claim they could get Gabriel Jesus in a swap with the Premier League side, while the likes of Isco and Marco Asensio are the interesting options at the Santiago Bernabeu.

But since there’s nothing about an interest from Manchester City or Real Madrid, it sounds like it’s actually a plan from Juventus to find a deal with those clubs rather than Pep Guardiola going out of his way to sign the Argentine.