Let’s take you back to 2018, back when Marko Grujić had been called up to the Serbia national team after his loan spell at Cardiff, setting off the Russia for the World Cup.

He never played a minute during the competition, but it was confirmation that Liverpool, who had bought him two years prior from Red Star, may have a gem on their hands.

The main problem was that with Jürgen Klopp’s midfield generally set at that time, there was little place for him at Anfield, and a loan move to Hertha BSC in Germany was organised, going so well that he remained there for an extra campaign this year.

However, before him settling in in Berlin, there was a brief period where he appeared to be close to teaming up with his compatriot Sergej Milinković-Savić at Lazio.

The Serie A side were determined to bring the now 24-year-old to Rome before he flew off for the World Cup, with ‘intense talks’ reportedly taking place and the player allegedly speaking to Simone Inzaghi personally about the move.

Nothing came of it, but Lazio’s interest never fully went away, as Corriere dello Sport report on Monday that he remains on a list of players they are considering to recruit this summer.

This comes amid more speculation surrounding the future of Milinković-Savić, but the newspaper make it clear the Italians will be buying a ‘physical midfielder’ regardless of the outcome. 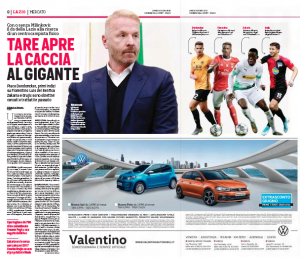 Grujić is described as one of the options being looked at, and they remind everyone of what happened in 2018, describing it as Igli Tare having held talks for him before finding himself faced with the ‘insurmountable obstacle’ that was Jürgen Klopp, who was only interested in seeing his player leave on loan rather than via a full transfer.

The towering midfielder is contracted at Anfield until 2023, and it wouldn’t be surprising if his manager brought him back this summer to evaluate him once again.

Now back in action with the Bundesliga club following the league’s return from the Covid-19 pandemic break, Grujić has picked up where he left off, starting all five game that have been played so far and helping his side pick three wins up along the way.