Once again, it appears that Serge Aurier finds himself in the middle of a transfer saga, only this time it’s to potentially leave the Premier League.

You may have already seen a couple of articles from Italy regarding Milan’s interest in the defender, and they continue to come, with Corriere dello Sport the latest to add their bit.

They explain the Tottenham defender is one of the ‘main objectives’ of the Serie A club this summer as they look to bolster their right-back position.

With Theo Hernández already at his disposal on the opposite side, Stefano Pioli ‘dreams’ of having two players like the left-back and Aurier at his disposal to start the new season.

Their interest in the Spurs man dates back to last year, as Corriere explain talks about a move ‘started a year ago’, but for ‘various reasons, among which were economic ones’, nothing came of it.

However, these have now been rekindled, and as reported by Sport Mediaset on Wednesday, Aurier has already said yes ‘through his agent’ when it comes to a move to Milan. 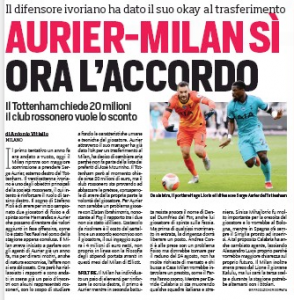 As things stand, Tottenham continue to ask for €20m, which the Italians are trying to get down now that they have the player’s ‘desire’ to move up their sleeve.

One worry was the relationship between Aurier and Zlatan Ibrahimović following the defender’s Periscope rant all those years ago, but that isn’t a problem for the Ivorian.

The big obstacle, as well as convincing Tottenham, remains Aurier’s wages of €4m/year, which aren’t ‘in line’ with what Milan want going forward.

There’s still work to be done, but the pieces are there. All that’s needed now is for them to be put together.