It’s been a few months since the Portuguese press started reporting Sporting’s interest in bringing Islam Slimani back to the club.

Despite having sold the striker to Leicester City in 2016, the Lions would be happy to take the player on a loan deal, as a backup to Bas Dost.

But now that the Dutchman has decided to rescind his contract with Sporting, the chase for Slimani is about to gain much more strength in the next few months.

It’s newspaper A Bola who reports it today, saying the Lisbon side will now insist on signing the player from the Foxes. 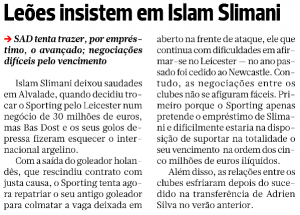 But the quest isn’t exactly easy. The first difficulty Sporting will find is Slimani’s salary, as the club can’t afford the €5m he makes per year at Leicester City.

Then there’s also the fact that the relationship between Sporting and Leicester hasn’t been good since Adrien Silva’s move in the last summer window.

Another question A Bola should ask is: would Slimani have the courage to return to Sporting given the club’s current crisis?