Unless you’ve been living under a rock somewhere, you know that AS Roma want to keep Chris Smalling next season.

Their biggest challenge all season has been convincing Manchester United to let him go at a decent price, but the Red Devils have yet to budge.

Their idea remains a fee of around €20m, which Roma aren’t prepared to pay.

For the Serie A side, the ideal scenario would be to get the Englishman on another loan for next season, which they’ll pay an upfront fee for, and then give United the rest in 2021.

The last time Gazzetta dello Sport reported on it, it was claimed that Roma were ready to put forward €3m for the new temporary deal, before setting the purchase clause at €15m, wanting to pay that in three different instalments.

That seemed like a long shot, and it appears the Italians are prepared to tweak things a little bit, as the same newspaper now state it’s a €17m package, split via €3m up front for the loan and a €14m fee payable in 2021. 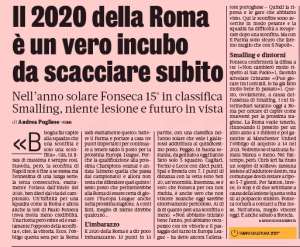 There’s no mention of the €14m being spread out, so we’re guessing they would pay it in one go, and a lot of these details are likely to be discussed on Wednesday, as was reported on Tuesday.

Gazzetta confirm the intermediary on the case will be in Rome on July 8th to discuss the matter with the Serie A side ‘to try and find out how to move for next season’.

This isn’t even close to ending, unfortunately.