Jude Bellingham to Borussia Dortmund is the big transfer story of the week.

Wednesday’s edition of SportBild presented the transfer as pretty much done, and explained the Birmingham City player would be BVB’s record signing.

A transfer fee was put at €35m, and it was claimed Dortmund would be beating Premier League clubs, including Manchester United and Chelsea, to Bellingham’s signature.

Further claims have come from media close to the Bundesliga club, and on Thursday Kicker report interest isn’t new.

They explain Dortmund tried to sign Bellingham last year, when it’s stated they could have got him on a free transfer, but he resisted their attempts. Kicker say the 16 year old decided with his ‘heart’ and wanted to commit himself to Birmingham City. 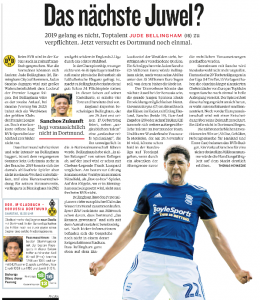 SportBild did, so perhaps there’s still some way to go on this one, and a chance for other clubs to get involved.

Either way, the youngster’s decision of the heart is set to make Birmingham City a lot of money in the near future.