The 19-year-old’s contract expires in 2021 and he’s decided against signing a new deal at the Etihad.

Barca’s season came to an end following a 8-2 defeat to Bayern Munich in the Champions League on Friday. A day later, City were knocked out of the competition by Lyon.

Mundo Deportivo claim that even before making a trip to Lisbon, the Catalan club had already made a few decisions for this summer and one of them was to bring García back to the club.

Pep Guardiola started the centre-back in City’s 3-1 defeat to Lyon and the newspaper states it could be García’s last match for the Citizens.

City and Barca had earlier decided to resume negotiations for the Spain U21 international after the Champions League. With both clubs out of the competition, they will ‘sit down soon’ to negotiate for the teenager’s transfer.

The Premier League club are looking for ‘more than €20m’ for the defender, but the Blaugrana are hoping to ‘reduce’ the fee ‘considerably’.

Barcelona believe García’s price should be much lower because of his contract situation and the amount of matches he’s played at the highest level. For now, the two sides are ‘very far apart’.

Should City decide against lowering their demands, then the Spanish side’s idea is to wait until next summer to sign García on a free transfer. 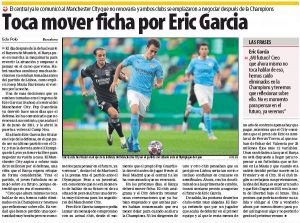 Mundo believe Barca’s idea to wait until 2021 could ‘accelerate’ the player’s exit from the Etihad this summer.

In addition to this, it could also force City to sell the player for ‘less money’ in order to avoid losing him for free.