Arsenal sold Emiliano Martínez to Aston Villa in 2020 and replaced him with Rúnar Alex Rúnarsson in the same window.

The Iceland international arrived at the Emirates from Dijon and went on to make six appearances for the Gunners, which includes one league appearance, in his debut season in England.

Having signed Aaron Ramsdale from Sheffield United in 2021, Mikel Arteta’s side let the 27-year-old join Belgian side OH Leuven on a loan deal last summer.

The Arsenal owned player has made 20 appearances for them this season, keeping two clean sheets and conceding 32 goals in the process. Rúnarsson’s teammate at Leuven, Rafael Romo, has confirmed his decision to leave the Jupiler Pro League side.

With Romo’s exit, Het Nieuwsblad now claim Leuven will have one ‘more problem’ because of the Icelandic keeper. 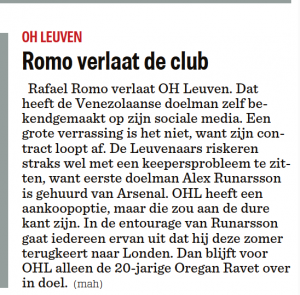 As a part of the agreement with the Premier League side, Leuven have an option to buy him beyond this season.

Rúnarsson extending his stay in Belgium is unlikely since the purchase option is ‘expensive’ and his entourage ‘assume’ the custodian will return to Arsenal in the summer.