Two days ago, ABC Sevilla reported Tottenham Hotspur’s attempt to sign Sevilla’s Bryan Gil is unlikely to be closed soon as the two clubs are ‘working out the details’ of the operation that will see Julen Lopetegui’s side receive €25m plus Érik Lamela as part of the deal.

There seems to be a development on this case if a report from today’s edition of AS is to be believed.

Within the report, it’s said the La Liga side will ‘finish in the next few hours’ the transfer of the 20-year-old to the north London club and in return, Sevilla will receive money plus the Argentine.

It’s claimed the former AS Roma man, who has entered his final year of contract at the north London club, arrived in Spain on Sunday afternoon.

After carrying out his medical examinations and signing the contract, Lamela is expected to travel to Portugal, where Sevilla are currently training. 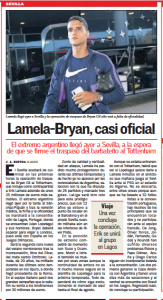 Gil, on the other hand, will have to wait to make the trip to the English capital because he’s currently with the Spain squad at the Tokyo Olympics.

To sum it up, AS report the two clubs are close to completing the operation involving Lamela and Gil, and therefore, they state the deal is ‘almost official’.