In case you weren’t aware, Piero Ausilio, Inter’s director of football, has been in England for the past few days watching some football.

After all, you can’t blame him, with some great games like Tottenham vs Manchester City, Manchester United vs Barcelona and Arsenal vs Napoli all available to him.

Well, gearing up for the transfer window, the Inter chief attended at least two of them (it isn’t stated if he was at the Emirates last night) and that’s made the Italian press all fuzzy and warm inside as they try and work out who he was watching.

One of their main priorities this summer will be to bolster their midfield, and while Ivan Rakitic has been a long-term target of theirs, there are other options at their disposal, including Granit Xhaka. 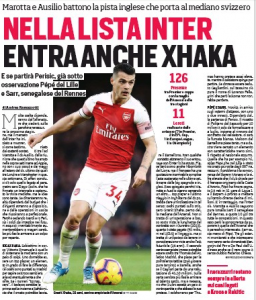 This is what Corriere dello Sport believe on Friday, even if they know that any deal taking the Switzerland international from the Emirates to San Siro would be an expensive one.

Having purchased him from Borussia Mönchengladbach for around £40m, Arsenal, if they were to consider a sale, won’t want to make a loss on the 26-year-old, who has been a regular under both Arsène Wenger and Unai Emery.

He’s just an option for Inter for now (we doubt the Gunners would entertain any approach), but we wanted to let you know exactly what was being said, just in case this story grows a mind of its own in certain areas of the English media over the weekend.