On the back page of Saturday’s edition of Mundo Deportivo, journalist Miguel Rico claims AC Milan are ‘thinking’ of the possibility of appointing Pep Guardiola as their manager, to return to the top.

The Italian club have struggled over the years and have appointed nine managers since Massimiliano Allegri left the San Siro in 2014. Their last silverware was in 2011.

Milan’s ambitions are limitless under the leadership of Paolo Maldini and Zvonimir Boban, but logically they must appoint a manager and coach who are capable of ‘facing such a level of demand’.

Milan have two names in mind; Guardiola for manager and Marc Overmars for sporting director, whose contract at Ajax runs down in 2024. 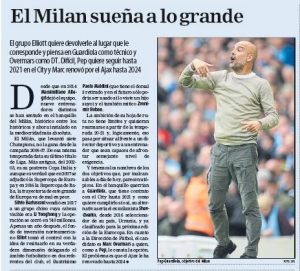 The former Barcelona manager is contracted to Manchester City until 2021 and wants to fulfil it.

This means Milan will have to look at an alternative option for next season and they could possibly look at their former player, Andriy Shevchenko.