The Baggies’ boss has claimed the 21-year-old should still has some chances for the first team, as the reason there’s been no room for him is because other players have been in pretty good form.

Willock was loaned to West Brom by Benfica at the start of the season, and despite the ten appearances in Premier League 2, he’s still to have a single minute for the first team.

That’s why, according to O Jogo, the Portuguese side have been keeping an eye on the situation, and aren’t satisfied with the way things are going. 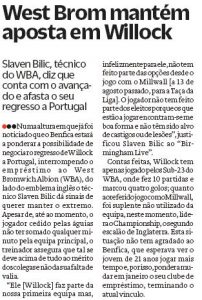 The outlet says Benfica expected Willock to be playing, and that’s why they’re wondering about cancelling the current loan and finding another club where he can have more minutes.

Signed by Benfica from Arsenal in 2017, Willock never made an official appearance for the Eagles either, so he’s now walking towards his third season with no minutes of first team football.