According to Fanatik, Fenerbahce are looking to bring in a forward this summer and they’re eager to sign either Atletico Madrid’s Nikola Kalinic or West Bromwich Albion’s Jose Solomon Rondon.

This summer the Yellow Canaries parted ways with Islam Slimani and Roberto Soldado and Michael Frey is also said to be on the verge of joining Turkish club Caykur Rizespor.

Subsequently it’s reported Kalinic and Rondon are targets for Fener and the Istanbul club’s sporting director Damien Comolli will soon fly to England for talks with West Bromwich man.

After an impressive loan spell at Newcastle United last season, Rondon may look to move away from the Hawthorns and Fanatik report Fenerbahce are hoping to convince him over a move to Istanbul. 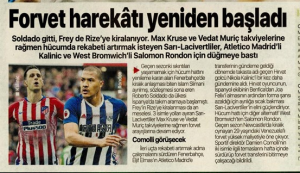 The Turkish club are close to selling Eljif Elmas to Napoli for €16m and they want to use some of the money to land the Venezuelan striker.

The 29 year old is under contract with West Brom until June 2020.