Over the past few days, we’ve seen a few suggestions that Milan could turn their attention to Malang Sarr as a solution to their centre-back problem.

Having lost Simon Kjaer for the season, the Serie A side are a bit short at the back, meaning a January acquisition is needed.

While Sven Botman was the favourite, Lille aren’t interested in selling him, meaning alternatives are being looked at, including the Chelsea player.

In fact, according to Gazzetta dello Sport, the belief is he might be top of the alternative list, as they claim that ‘to the candidacy of Attila Szalai, there are others, above all that of Malang Sarr’.

That suggests he is high up on Paolo Maldini’s wishlist, and it could all depend on what Thomas Tuchel has planned for the player. 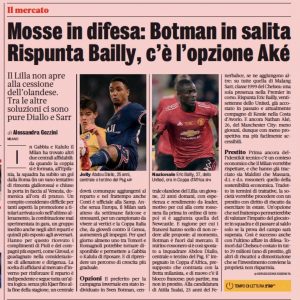 He hasn’t been used that often, mostly appearing in cup competitions, but there is always a need for quality in depth, meaning Chelsea might want to keep him around.