Sergej Milinković-Savić is all set to leave Lazio at the end of this season, if various reports coming out of Italy are to be believed.

In need to find a ‘heir’ to their star, the Serie A side have started searching in the market and have set their sights on Chelsea’s Ruben Loftus-Cheek.

That’s according to Corriere dello Sport, who state the midfielder will end up in the transfer market in the next window.

It’s also claimed the England international is ‘very much liked’ by Maurizio Sarri. He has struggled to have an important role at the west London club, barring the 2018-19 season, when he managed 10 goals and five assists in all competitions.

Loftus-Cheek played under the orders of the current Biancocelesti coach at Stamford Bridge that season and is still ‘very fond’ of his former manager.

At the request of Sarri, the England international’s name was included in the notebook of Lazio sporting director Igli Tare last summer. Lack of regular game time at Chelsea this season has convinced him to change clubs in the summer. 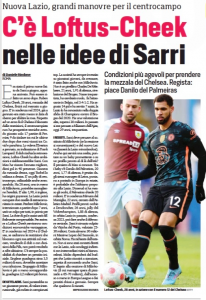 Chelsea are currently facing sanctions imposed by the UK government and as it stands, they cannot make new signings or offer contract extensions to their current players.

If the restrictions are lifted, then the report states the Blues ‘will not be able to sell him at very high price’.

The player currently earns €3.5m per year and he will have to take a pay cut to reunite with Sarri at the Italian capital club.