Having just signed Achraf Hakimi from Real Madrid (it’s all but official) for €40m + €5m, you would think Inter might calm things down a little bit on the transfer market, but that doesn’t appear to be the case.

Antonio Conte and those in charge are determined to bolster their squad for next season, clearly feeling good about how the former Chelsea manager’s first season in charge has gone, and they need recruits in defence to go with the Morocco international.

With the right sorted, their attention is turning towards the left, and there’s a strong belief the Italian could turn to his former club and plunder Stamford Bridge for one of their full-backs.

According to Gazzetta dello Sport, both Emerson Palmieri and Marcos Alonso are ‘hot names’, joined by FC Barcelona’s Junior Firpo. 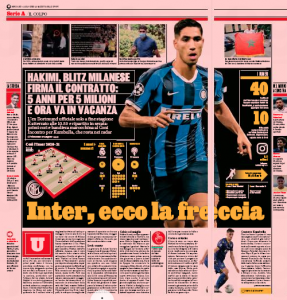 There’s no indication of how much they would cost, but with Hakimi going for €40m, you would expect Chelsea to use that as a starting point for their valuation, perhaps knocking down a few million here or there because of contract situations and age.

Either way, we aren’t done hearing about Inter this summer, or the Blues for that matter, as both are set to have a very active transfer period.