According to a claim in the Turkish media, Fenerbahce are interested in signing Chelsea forward Tammy Abraham.

AMK Spor say the Turkish club’s sporting director Damien Comolli is talking with Chelsea officials with regards to loaning the 20 year old for a season.

The English striker spent last season on loan at Swansea City, but has since returned to Stamford Bridge.

With the likes of Olivier Giroud, Alvaro Morata and Michy Bathsuayi at Chelsea the youngster will struggle to get games next season, and may need to go out on loan again. 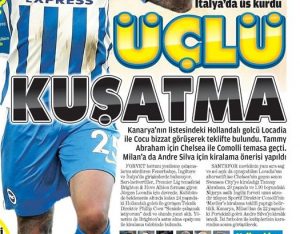 As reported earlier in the week Fenerbahce are also interested in Brighton & Hove Albion forward Jurgen Locadia, but AMK Spor says this transfer is unlikely to happen.

Locadia signed for Brighton in January for €17m and his former PSV manager Phillip Cocu was said to be interested in the Dutchman.

The Yellow Canaries had been looking to loan Locadia from Brighton, which seemed a fanciful idea.