Nuno Espirito Santo stepped down from his role to later take over at Tottenham, while Bruno Lage was appointed as his replacement to try and refresh things at the Molineux.

We’ll have to wait and see if that pays off, but, in the meantime, Wolves have been trying to reshape their squad a bit, with a defensive midfielder seemingly an area they want to address.

That’s because Gazzetta dello Sport are reporting that Amadou Diawara, currently at AS Roma, ‘has also been talked about with Wolverhampton emissaries’.

The problem there, however, is that ‘the Guinean does not seem to like the destination very much’. 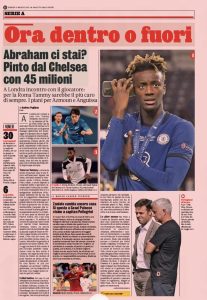 Why that is isn’t explained, but he is one of the players the Serie A side are looking to offload, wanting to bring someone like André Frank Zambo Anguissa in in his stead after failing to lure Granit Xhaka away from Arsenal.

Interestingly enough, this isn’t the first time that Diawara has snubbed the chance to join Wolves, having done so back in July.

Why they keep offering him there is beyond us, but perhaps it’s Wolverhampton who want him badly and clearly hope he has changed his mind over the past 40 days or so.