You might have heard that Jorge Mendes, already rather influential at Wolverhampton Wanderers, is also trying to put his fingers in the Everton pie.

It sort of started when Carlo Ancelotti brought in James Rodriguez from Real Madrid, as the Portuguese super agent is the Colombian’s representative, and the rumours followed from there on in.

We’ve seen a few of his clients linked with a move to Goodison Park over the past few months, with the likes of Gonçalo Guedes and Rafael Leão the more prominent names player wise.

The latter of those two is back in the Italian press on Thursday, as Milan try and figure what they want to do with the young forward, who has never reached the expected heights at San Siro his big transfer from Lille promised.

Corriere dello Sport state a transfer meeting took place between the Serie A side and Mendes ‘in recent days’, which served to ‘take stock of the player’, who ‘seems to not be entirely unsellable for the club’.

That means that ‘if a good economic proposal were to arrive, Milan would evaluate it’, with rumours ‘of a possible advancement of Marseille, as well as Everton and Wolverhampton Wanderers’. 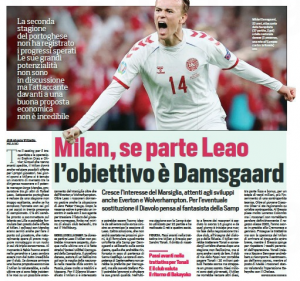 For now, though, the Toffees should really be focusing on finding a manager, while Wolves will be waiting to see what Bruno Lage thinks of his current squad before making any incoming transfers of a Rafael Leão magnitude.

Still, it seems Jorge Mendes has noted both Premier League clubs wouldn’t mind working with his client, and he’s passed that on to Milan, who eagerly await an offer landing on their desk.