Home Europe Club ‘sure’ they haven’t broken any rules over Liverpool exit – Both...
SHARE

Following the unveiling of Bobby Adekanye at Lazio, Liverpool, who were only paid a £240k compensation from his ‘free’ transfer to Italy, have asked FIFA to look into the deal, concerned he was tapped up by the Serie A side.

FIFA rules state players under the age of 23 aren’t allowed to hold talks with other clubs if they are still under contract, and the swiftness of the Italian club’s announcement after his deal with the Reds expired clearly raised a few eyebrows.

Lazio already had to clarify back in January they weren’t holding talks with Adekanye over a future transfer amid speculation he would join them, but this time they haven’t bothered, at least not yet.

According to Il Messaggero, the Serie A club are ‘sure’ they didn’t break any rules, confident they did everything by the book. 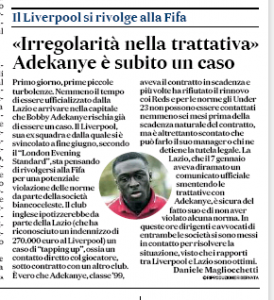 It’s explained board members and lawyers from both clubs have been in touch to ‘resolve the situation’ as relations between Liverpool and Lazio are ‘optimal’ from previous successfully brokered deals, such as Lucas Leiva’s and Luis Alberto’s.

We’ll have to wait and see how things pan out, but over in Italy, it seems everyone is relatively calm about the situation.