Since Manchester City loaned Pedro Porro to Sporting in the summer of 2020, we’ve covered countless stories from Portugal claiming the Lions will sign the fullback on a permanent deal.

The Lisbon side only need to pay €8.5m for that. Despite several reports claiming there’s already a personal agreement with the player, that purchase continues to be delayed, as the deadline is at the end of this season.

Now newspaper O Jogo today features a story on this situation, claiming that Sporting’s Champions League clash against Borussia Dortmund will be crucial for Porro’s transfer.

That’s because a win would clinch Sporting’s place in the knockout stage, and that would guarantee the club €9.6m, which would provide the funds to pay for the fullback. 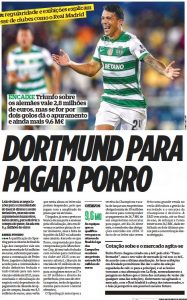 The most interesting claim here is that according to O Jogo, Sporting are struggling with money and can’t afford buying Porro from Manchester City now. That’s why this decision continues to be delayed, as there are other pending payments at the club.

The newspaper adds that the 22-year-old’s good performances for the Lions have been raising his market value and drawing interested clubs, with Real Madrid leading the race.

That’s one of the reasons why the Portuguese club will do what it takes to sign him, as they could make a profit with his sale very soon.

If they can’t get the funds together then Real Madrid could go straight to Manchester City.