Tuesday’s edition of Catalan newspaper Sport claims Barcelona are ‘almost working around the clock’ to facilitate Paco Alcacer’s move to the Premier League.

Earlier this month, we covered a report from the same publication, who talked about Watford’s interest in the 24-year-old.

The English club had identified the attacker as a replacement for the Brazilian and Sport reported last month the La Liga winners’ turned down Javi Gracia’s side’s earlier approach for the Barcelona fringe player.

Alcacer moved to the Camp Nou from Valencia in 2016 and still has three years left on his current deal.

Ernesto Valverde’s side are ‘still negotiating’ with Watford, and are ready to allow them to sign him on an initial two-year loan deal and then have the option of taking the striker on a permanent deal. 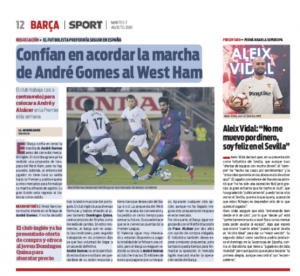 Sport claims the Torrent-born player wants to wait and see if he will receive better proposals, but Barcelona want to push the deal because the Premier League transfer window will close on Thursday.