Home Europe Club still hoping to get player for €25m despite Watford refusing to...
SHARE

It doesn’t matter if Watford are not paying €25m to keep André Carrillo at the club. Some other club will spend that much to have him.

That’s what Benfica think, according to Correio da Manhã today. The newspaper claims that even though the player is not staying at the Premier League side after his season long loan, he can still be sold for that amount to some other destination.

The plan at Benfica is to let Carrillo play the World Cup to show what he’s worth. Then they will negotiate for him.

Signed on a free transfer from Sporting in 2016, the Peruvian international could never prove himself at Estádio da Luz. He only stayed at the club for one season, and then was sent to Watford on a one-year loan deal. 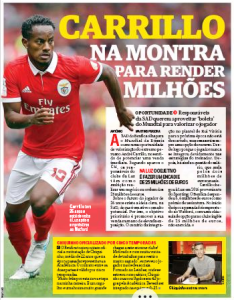 Wearing the Hornets’ shirt, he’s made 30 appearances, having scored two goals and creating two assists. That’s probably the reason why the club are not activating the buying option, as Correio writes.

With reports saying Watford wanted to get Carrillo on a cheaper deal, maybe this is the reason why it never happened. Because somehow, Benfica still believe he’s worth that much.