Newspaper Record is the one running an exclusive story saying the Eagles started action as soon as they knew the striker would leave the Premier League side.

The outlet says Benfica not only contacted Aguero, but also some of his Manchester City teammates who used to play for the Lisbon side, such as Ederson, João Cancelo, Ruben Dias and Bernardo Silva, as they’d help the club to convince him of making the move.

A ‘diplomatic pressure’ is expected to be done in a second stage, with some of Aguero’s compatriots and also former Benfica players, Pablo Aimar and Javier Saviola, having already made themselves available to talk about it. 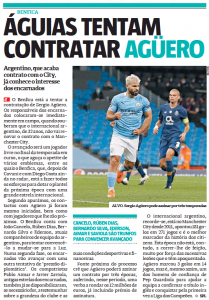 Record says sources close to the process claimed Aguero could sign a three-year deal with Benfica.

The Lisbon side would spend a total of €12m, including the salary for three seasons and the signing on fee.

The Eagles had previously been in talks with the likes of Edinson Cavani and Diego Costa, and now hope to finally land a world class striker who’s becoming a free agent.

Following the announcement of his departure from Manchester City at the end of the season, Aguero has been linked to several sides, and will clearly have many options on the table by the summer.