Home Europe Club standing by to sell 29 year old to Southampton before the...
SHARE

Inter Milan are keeping a close eye on Virgil van Dijk’s situation at Southampton this summer.

Van Dijk has publicly asked for a transfer from Southampton, with Liverpool chasing the defender earlier this summer. Liverpool were forced to issue a publicly apology for the way they went after Van Dijk, but the Dutch defender’s future remains under some doubt.

Inter Milan aren’t about to jump into the Van Dijk race, finances would almost certainly prevent that, but Correire dello Sport believe it presents a market opportunity at Southampton.

Should Van Dijk leave Southampton then it frees up a space for Inter to transfer Andrea Ranocchia to the Premier League club. Once again, Inter have spent the window trying to 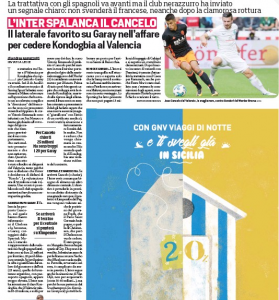 find a home for the central defender, and a sale to Southampton is being eyed.

Ranocchia did well for Hull City on loan for the second half of last season, and it’s perhaps a surprise there’s not been more Premier League interest in the player.

Southampton, however, may be urged to look at more exciting targets should they receive a huge fee for Van Dijk.