This week, the saga involving Everton and Sporting midfielder Matheus Nunes was brought back by the Portuguese media, with claims on TV saying the player is being sold to the Toffees.

Now even though local newspapers seem to ignore where the most recent updates have come from, today they bring a response to the reawakening of this story, mostly saying that the move isn’t close to happening.

Earlier today, we already covered a short piece from Record saying the Lions haven’t received any bids for the midfielder so far.

This message is being sent by a couple of other outlets as well. Newspaper Correio da Manhã, who says the claims are ‘from England’, reports Sporting would like to sell the player to balance their accounts this summer, but will only do it for €20m. 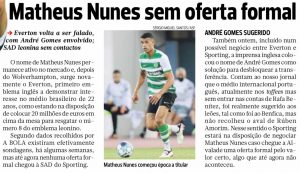 The most interesting story probably comes from A Bola. They start by saying there were approaches for this transfer ‘some weeks ago’, but no offers have reached Sporting yet.

Then they talk about the rumours from the English media which said Everton midfielder André Gomes could be included in the deal. The newspaper writes that the player was indeed ‘suggested’ to the Lions, but his signing didn’t get approval from manager Ruben Amorim.

That means Sporting will only negotiate Nunes for a real offer, and ‘that hasn’t happened so far’.