Portuguese side Benfica have announced a contract extension for 19-year-old midfielder Florentino Luís, who’s now tied to the club until 2023.

After the official news, local newspapers cover it with more details this Wednesday. Outlet Record, for example, brings a story claiming that the player is now protected by a €60m release clause.

The reason for the new contract and the new clause is the attention that the player has been getting in the youth levels. Even though he hasn’t made his debut for the first team yet, Benfica consider him to already have a name in the market.

Now there’s only one interested club who are named by Record, and that’s Liverpool. The outlet claims that the Reds have sent scouts to watch the midfielder in the UEFA Youth League. 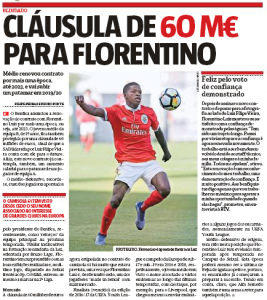 As Florentino is still being prepared to be introduced to the first team, it should take a while until he finally shows his skills among the big boys. He currently plays for Benfica B.

But if Liverpool are really interested, we should soon see the Reds named in the scouting lists which are weekly revealed by the Portuguese press. Unless they’ve given up after the €60m clause was divulged.