Takvim claim Galatasaray manager Fatih Terim wants to see Victor Wanyama in his team and that the Turkish side will hold transfer talks with Tottenham Hotspur in the coming days.

Gala are in the market for a defensive midfielder after Faith’s fallout with Steven Nzonzi, and Takvim report Wanyama could be brought in to replace the Frenchman.

Nzoni has been linked with Aston Villa and Everton in recent weeks.

It’s reported Tottenham manager Jose Mourinho will allow Wanyama to leave in this transfer window and a loan move to Galatasaray could possibly happen before next week’s deadline. 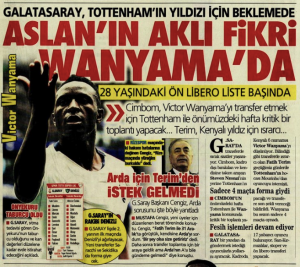 The former Celtic midfielder has only made two Premier League appearances for Spurs this season and subsequently he could be looking for a move to a club which can give him regular first-team football.

Galatasaray are currently sixth in the Super Lig table, and will be hoping their January business can help them climb higher up in the second half of the season.

Wanyama’s contract with Tottenham will expire at the end of June 2021.