We know our readers have been missing the Bruno Fernandes story, so after spotting something in newspaper A Bola today, we quickly worked to bring it to you.

The newspaper has an article today saying the midfielder has an offer to renew his contract with Sporting in case he doesn’t leave the club this summer.

And one of the reasons why he’s getting a new contract is the attempt made by Tottenham Hotspur to sign him earlier this month.

A Bola says Spurs offered around €70m to sign the midfielder, and that convinced the Lions to protect Fernandes with one more year of contract. 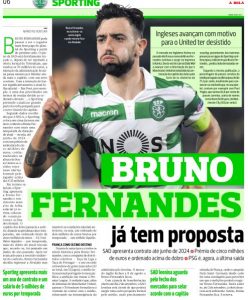 It’s never been a secret that when signing his last contract with Sporting, Fernandes had agreed a clause which said he would get €5m and a new deal in case the club rejected an offer of above €35m. So they are only waiting for the transfer market to close before confirming it.

A new contract basically confirms that Tottenham Hotspur made official bids for him this summer.

What we wonder is if his departure will become even more unlikely for the next transfer windows. A Bola doesn’t bring any information on a new release clause, especially because the current €100m amount is more than enough to protect him.