Fanatik claim Galatasaray want to keep the majority of their title-winning squad for next season and the Turkish club will make an offer for Stoke City midfielder Badou Ndiaye.

The player spent last season on loan with Gala, just six months after signing for the Potters.

It’s reported Galatasaray officials will open talks with Stoke City in the coming days and will ask the Championship club for another loan deal for the Senegal international.

However, If Stoke City remain insistent on selling Ndiaye, Fanatik reports Galatasaray could look at other targets to replace the 28 year old. There have been recent claims the English side will accept offers in the region of €7m.

From the player’s perspective it’s reported Ndiaye wants to continue at Galatasaray after helping them secure Champions League football for next season. 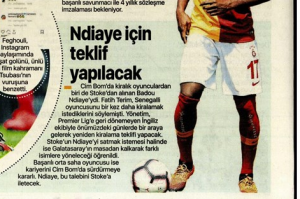 Ndiaye has been instrumental in Galatasaray’s season, playing 32 games in all competitions and scoring three goals.

His contract with Stoke City will expire in June 2022.