Home Europe Club set to go for Wolves player after tracking him for years...
SHARE

Benfica’s interest in signing Ruben Vinagre from Wolverhampton Wanderers is once again highlighted by the Portuguese media today.

A new story from newspaper Record now says the left-back is ‘well placed’ in a list of potential signings the Eagles have for the summer.

The Lisbon side are expecting to cash in with the sale of Alex Grimaldo, who has big clubs going after him, and Vinagre is seen as a replacement for the Spaniard.

Record says Benfica have been following the Wolverhampton man since his time in the academies of Portuguese clubs, and now continues to impress the Eagles’ scouting department. 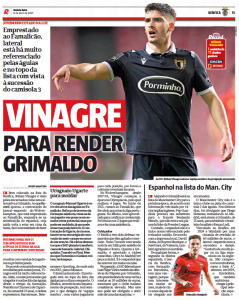 The 21-year-old is currently enjoying a loan spell at Portuguese side Famalicão, for whom he has 13 appearances this season.

Record don’t bring us much in terms of how far Benfica have gone in their attempts to get Vinagre  or how much will Wolves demand for his sale.

Vinagre started the season moving to Olympiacos on a loan deal, but his spell was eventually cut short in January, when he was sent to Famalicão.

His contract with Wolves runs until 2024, and we might have to wait and see whether he’ll get another chance under Nuno Espírito Santo going forward or if this spells the end of the line of his time in Wolverhampton.