It’s never been a secret how happy Sporting are with the loan signing of Pedro Porro. The Manchester City owned player already has 21 appearances for the Lions this season and continues to get positive stories from the local media.

Today, newspaper O Jogo features a piece saying the fullback is drawing attention from Spain manager Luís Enrique, and should soon get his first chances for the national team’s main squad.

His good form obviously raises questions regarding his future at Sporting, but that’s something that the Lisbon side seem to be very confident about.

O Jogo recalls that Porro signed for the Lions on a two-year loan spell, and the club have the right to buy him for €8.5m until the summer of 2022. 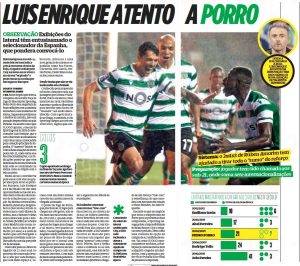 Still, it’s likely the operation will be done before that, with the newspaper claiming today that his performances ‘have already convinced’ Sporting to buy him, and that should be done at the end of this season.

Signed by Manchester City in a €12m move from Girona in 2019, Porro first had a loan spell at Real Valladolid and was then sent to Sporting last summer. He’ likely leaving the Premier League side without having a single chance to prove himself for Pep Guardiola.