The Turkish giants have been recently linked with a move for the 23 year old and Fotomac today claim they will watch the Reading player closely, along with Sweden’s Robin Quaison.

Fenerbahce were said to be interested in Puscas before Reading signed him from Inter for €8m last summer, but despite him heading to England it seems the Turkish club remain interested in the player.

It’s claimed Fenerbahce scouts will watch the game and present a report to the Super Lig club’s manager Ersun Yanal. The Fener boss wants to sign a forward in the next transfer window to partner Vedat Muriqi. 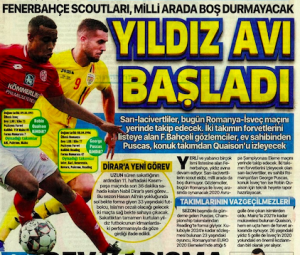 Puscas has made 16 appearances for Reading this season in all competitions, scoring four goals.

His contract with the Championship club will expire at the end of June 2023.