Everton defender Lucas Digne is on Inter Milan’s list of options as they look to find a deputy for Ivan Perisic in their squad.

That’s according to Gazzetta Dello Sport, who name the Frenchman as one of two options that the Italian side are looking at.

They report that Inter are currently browsing the ‘daisy chain of opportunities’ that is the transfer market as they look to improve their squad in the January transfer window.

The club will first focus on getting rid of some players, but when that is done, the focus will turn to additions, and one of those is a left-back.

That is where Digne comes into the picture. The Everton man is seen as an ‘investment for the future’ and a player who would provide a ‘high-level arrow’ on the left wing.

His time at Everton seems to be over after a falling out with Rafa Benitez and the impending arrival of Vitaliy Mykolenko from Dynamo Kyiv.

That is something Inter can take advantage of, and they want to find out if there are ‘real margins’ for them to get a deal done. 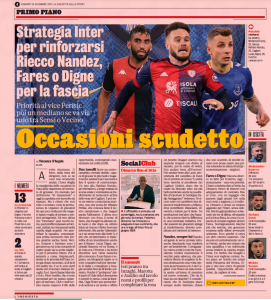 One issue is liquidity, or more to the point, Inter’s lack of it. They can only sit at the table and offer a loan, and it’s unknown whether that would suit Everton at this moment in time.

It’s felt Digne ‘would be willing’ to move to Milan as it would allow him to ‘relaunch’ himself, ‘have fun’ and ‘fight for the title’. Three big motivations that could make the difference when it comes to transfer negotiations as a player pushing to leave can force a club’s hand.

It seems the clubs have worked to do, though, but the Everton man is a target and seen as a player who can bring ‘great quality’ to Simeone Inzaghi’s side.