Erling Haaland’s future has become a regular topic of a discussion in the Spanish press as Barcelona and Real Madrid are in the picture to sign the Borussia Dortmund star.

These two clubs are joined by Manchester City in the race to acquire the striker’s services.

Joan Laporta, the Catalan club’s president, has hinted his side may not be able to invest big on the 21-year-old since the overall cost of the deal would reportedly be around €350m.

Sport on Tuesday explains the Norway international is studying three options and this includes Xavi Hernández’s side. However, there’s a growing belief he will not arrive at the Camp Nou in the summer.

It’s claimed the frontman is handling better proposals from Pep Guardiola’s side and the Madrid club. Barca, who are ‘scared’, ‘know first-hand’ the proposals made by these two clubs and they will not match these offers.

Therefore, Barcelona tried to convince Haaland with their sporting project and to do that, Xavi made a trip to Munich to hold talks with the player. 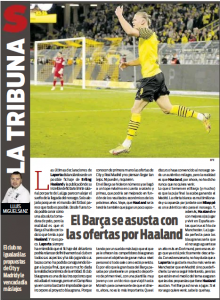 He has not said no to them, but Sport suggest it would be a miracle for him to be convinced to join Barcelona over the likes of Manchester City or Carlo Ancelotti’s side. If the former fails to sign Haaland, Laporta would prefer he moved to the Etihad than Real Madrid.

Real Madrid’s offer and the commitment to play with Kylian Mbappé seems like a ‘real challenge’ for the BVB attacker. Therefore, he sees the ‘playing and living in Madrid with better eyes than the cold weather in Manchester’.

Barcelona would hope not, and Haaland moving to City rather than Real Madrid is the lesser of two evils for them.

Meanwhile, Mundo Deportivo report the Citizens ‘have an advantage’ over Barcelona in the transfer race due to their ability to carry out such a ‘gigantic operation’.