Rafa Mujica’s medium term future could be more secure than the past few years of the 22-year-old’s career.

Barcelona B decided not to offer him a renewal in 2019, because they had other young attackers coming through who they wanted to make space for.

That saw Victor Orta spot the opportunity and sign Mujica for Leeds United, and since then he’s been out on four loan moves… none of which have been particularly successful.

At the beginning of the season, the player was sent on loan to Real Oviedo, however, it quickly became clear they didn’t see a future for him.

Wanting to cancel the loan in January, Las Palmas came forward as an option but they had to offload their own unneeded players first, meaning the whole thing dragged on through the window.

Since then, Mujica has had five LaLiga2 appearances and scored once.

Sport have a small report on Friday carrying quotes from Las Palmas’ president, who told Spanish radio there’s an agreement for a longer term transfer. 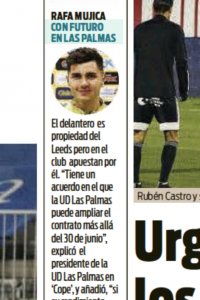 They quote him as saying: “There’s an agreement in which UD Las Palmas can extend the contract beyond June 30th. If his performance continues as it’s been going, he must continue here.”

And that could be the last of any chance of a Rafa Mujica future at Leeds United.