This summer has been a busy one for Roma, who have gone about something of a rebuild under new manager Paulo Fonseca.

Adding a new centre back to the squad has been a pressing matter, particularly following Manolas’ departure, and it remains an area the club want to add in despite already signing Mert Cetin and Gianluca Mancini,.

Tottenham defender Toby Alderweireld has been a target for much of the summer but remains too expensive and Corriere Dello Sport report today that two other Premier League defenders, from Liverpool and Arsenal respectively, could now be at the top of the list.

According to the newspaper, Dejan Lovren and Shkodran Mustafi are players the Serie A side are looking at. 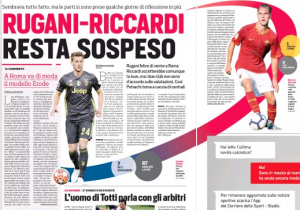 Lovren has been a target for Roma throughout the summer and was at one point ‘one step away’ from joining the club, and Corriere Dello Sport say talks could be reopened.

Roma may have to move quickly on that front, however, as Lovren is in talks with Bayer Leverkusen too.

Mustafi is another ‘hypothesis’ for the Italian club and could be a more straightforward deal to get over the line.

The German defender isn’t wanted at the Emirates, with Unai Emery having made it clear he should find himself a new club.

That gives Roma some power in negotiations, although Arsenal are likely to want to try and recoup as much of the £37m they paid for Mustafi as possible and that could be an issue given Roma have a limited budget.