When an opportunity to sign a player like Tammy Abraham, who has proven to be able to score in the Premier League under the right conditions, comes along, you definitely consider it.

That’s what Arsenal are doing, with the Chelsea player seemingly on his way out of Stamford Bridge due to the impending arrival of Romelu Lukaku.

There have been numerous rumours of the Gunners wanting to sign the England international, as their need for a younger striker is becoming more and more apparent, but they face competition from AS Roma, where José Mourinho wants Abraham to replace Edin Dzeko.

The Portuguese manager knows the Chelsea man from their time at Stamford Bridge together, and therefore attempts have been made from his general director, Tiago Pinto, to get a deal done.

The problem Roma are encountering, however, according to various sources, is that Abraham seems to want to stay in London if he can, thus preferring Arsenal. 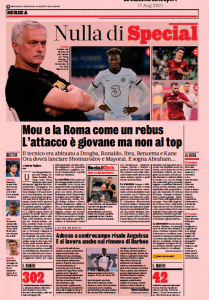 To counter that, Mourinho allegedly rang the player to try and convince him to come to AS Roma, but Gazzetta dello Sport report on Wednesday that the Gunners manager has also taken matter into his own hands.

They explain ‘the player has also received a phone call from Mikel Arteta’, as the Serie A club ‘remodelled’ their offer for the Chelsea man from a two year €5m loan with an option to buy at €35m to an ‘obligation that can be triggered after the first season’ if needs be.

It seems, then, that both Mourinho and the Arsenal manager are pushing down their separate ends to convince the Blues forward.

May the best man win.