The Turkish side have just two senior central defenders within their current squad, Serdar Aziz and Sadik Ciftpinar, with the former ruled out for a month because of injury.

Subsequently, Huddersfield Town defender Zanka remains a primary target for Fenerbahce and Fanatik say the Turkish club are hoping to confirm his arrival this week.

It’s reported they want the Dane to play against Sivasspor next weekend, the Super Lig club’s final game of their preseason.

Fanatik claim both clubs are still in talks over a potential move and Fener are hoping Huddersfield Town will drop their asking price for the player. 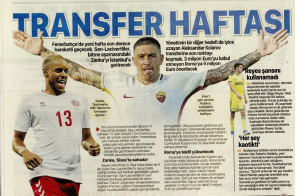 The Turkish newspaper report the Yellow Canaries have already reached an agreement over personal terms with the 29 year old.

With Huddersfield Town’s relegation back to the Championship it seems likely Zanka will leave the club this summer.