Earlier today, we covered a report from Mundo Deportivo, who claimed that Denis Suarez is facing a crucial period in a potential move to Arsenal.

It was explained the Gunners are looking at a loan deal with an obligation to make the transfer permanent after the end of the season.

Another Catalan newspaper Sport once again mentions the 25-year-old completing a switch to the Emirates could be a serious possibility.

In the report, it is further claimed the north London club submitted a proposal to take the former Villarreal man on a loan deal with an option to sign him next summer for €25m.

However, the La Liga winners have turned down the offer made by Unai Emery’s side and they have made it clear that they will sell Suarez for €20m, while they are also open to the idea of a loan transfer with the mandatory purchase option for €20m.

The Spaniard has urged his employer to sanction move to Arsenal either on loan or a permanent transfer after realising he will not have regular minutes at Camp Nou. 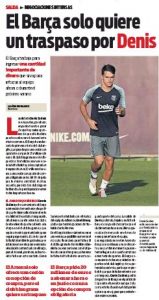 So far, there is no agreement between the two clubs and the negotiations are still ongoing.

Sport claims the possibility of all parties reaching an agreement is still not ruled out. The issue is whether the clause is compulsory or not.