Bosnia and Herzegovina international Amer Gojak left his homeland club Olimpic for Dinamo Zagreb in 2015 and has featured regularly for them in the last three years.

Journalist Miguel Rico, writing on the last page of today’s edition of Mundo Deportivo claims the 22-year-old caught the attention of clubs across Europe, including West Ham United and Southampton in England.

The Hammers and Saints submitted an offer to acquire the midfielder’s services, but the Croatian side turned down their approaches because they had no plans to sell him.

Rico doesn’t state exactly when Southampton and West Ham made their offers for the player. 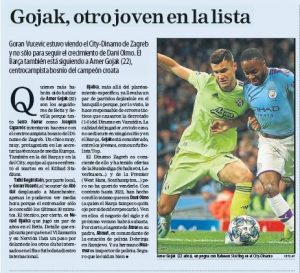 Gojak’s contract with his current employer runs down in 2022 and Dinamo view him as a player who can bring a big amount of money in when he eventually leaves the club.

Along with Dani Olmo, the club are looking to conduct the ‘business of the century’ with his sale, which doesn’t suggest there’s a bargain available here.

Mundo states Dinamo are hopeful of having an auction for Gojak next summer.