While buying a new striker is definitely top of the list at Arsenal this summer, a new left-winger could also be on the cards.

The reported interest in Cody Gakpo suggests this, but if the Gunners end up missing out on the Dutchman, then a cheaper alternative could present itself to them.

That man is Luis Sinisterra, who currently plays for Feyenoord and is likely to be sold in the summer if the right offer comes along.

The Colombia international is having a great season with the Eredivisie side this year, scoring 18 goals and assisting another 11 in 38 appearances, and will not be short of clubs queuing up for his services in the coming months. 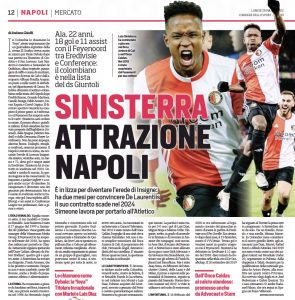 In fact, a line appears to have already started, as Corriere dello Sport claim the player ‘will be sold’, and the price ‘is close to €15m’.

That’s very affordable for a lot of clubs, and it’s said the Dutch side ‘has received offers from England (Arsenal), Spain (Atlético Madrid) and Germany (Bayer Leverkusen) for Sinisterra.

We’ll have to wait and see what comes of this, but it could be that the player is on a list of players the Gunners want to acquire, and at that price, it would be silly not to think about it.