Youri Tielemans’s contract at Leicester City expires in 2023 and he continues to be linked with clubs in England and across Europe.

Recent reports named Barcelona as one of the contenders and these claims are backed up by Catalan newspaper Mundo Deportivo, who say they ‘really like’ him.

It’s claimed the La Liga side have ‘closely followed’ the midfielder for a long time and his profile is ‘very interesting’, due to the 24-year-old’s technical characteristics, age, time left on his contract and physicality.

Ronald Koeman’s side are looking for a player with qualities similar to the ones possessed by Tielemans.

From the Camp Nou, they have informed Mundo the Spanish club have an interest in Brendan Rodgers’ man, but ‘today, there are other priorities’. The report, however, doesn’t mention what those ‘other priorities’ are for Barcelona. 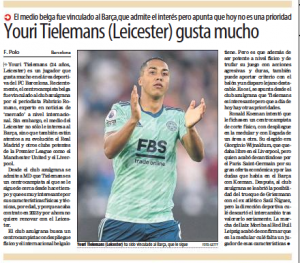 Mundo state the Belgium international hasn’t wanted to renew his contract with the Premier League club so far.

If Leicester fail to convince Tielemans to sign a new deal, there will be more reports linking the player with a move away from the King Power Stadium.