While we have patiently covered the Chris Smalling to AS Roma saga as best we can ever since it started, in truth, we have been dying a bit inside throughout.

It’s not been the most exciting of transfer rumours as it’s mostly been the same, with Manchester United holding out for €20m and the Serie A side unable to match that, trying to convince Ed Woodward to accept a lower fee.

This stalemate has gone on for months now, and following the acquisition of Marash Kumbulla, it appears the Italians’ patience is starting to run thin.

That’s what Corriere dello Sport are reporting on Wednesday, claiming Roma are now ready to offer what would be their ‘last attempt before definitively abandoning the idea of bringing the centre-back back to the capital’.

We relayed the same newspaper’s report on Tuesday, which said Paulo Fonseca’s public admission that he was still in touch with the Manchester United player didn’t go down well at Old Trafford.

The belief was the Red Devils were now less inclined to accept a lower offer for Smalling, meaning Roma’s upcoming bid probably won’t be accepted.

Corriere report the Serie A club ‘will try to add something to the offer of €12m refused about two weeks ago’, meaning they will put forward a ‘loan for €2m with an obligation to redeem at €12m and a further €1m in bonuses in 2022’.

That takes the total to €16m (plus the €3m already paid for last season’s loan).

Should Manchester United turn this down, Roma will then shift their attention to other objectives, such as Galatasaray’s Marcão or Torino’s Armando Izzo.

Regarding Smalling, it’s said ‘not much optimism filters through Trigoria’ about a bid being accepted, but it’s worth one last attempt, which entirely rests on how badly United want to sell Smalling. 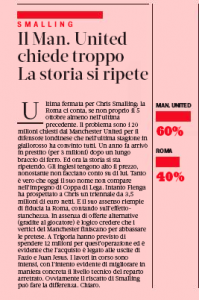 Gazzetta dello Sport are a bit more hopeful, claiming that if Manchester United don’t have any offers come the end of the window, they might be more willing to accept Roma’s terms, but that seems more like wishful thinking at this stage.

That’s echoed by the fact they believe there’s a 60% chance he stays at Old Trafford.