Home Europe Club ready to work with Manchester United to get transfer done in...
SHARE

AC Milan’s takeover has finally gone through. This means that after what’s felt like years of talking about Chinese investment on the horizon, it could actually have an impact in the next transfer window.

Many players have been linked, a lot of them unrealistic, but one who could make sense is Manchester United’s Matteo Darmian. Gazzetta dello Sport cover the situation on Wednesday and explain that whilst it’s Inter who have been the most interested over the past year, their Milan rivals could move in and get a deal done.

Darmian started his career at the Rossoneri, making his debut at just 16, before moving to Padova on loan, then Palermo permanently, then Torino… and finally Manchester United.

It’s not clear what Manchester United would ask for the player, but Gazzetta believe Milan 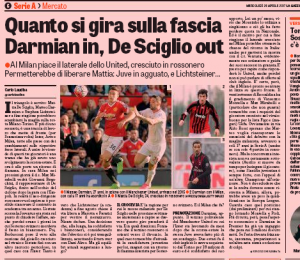 will try and get a deal done this summer. That would allow them to sell Mattia De Sciglio, who only has a year left on his contract.

For Darmian it would be an opportunity to return to his boyhood club, and also give him a much better chance of making Italy’s 2018 World Cup squad. In those circumstances, if Darmian wants the move then it’s unlikely Jose Mourinho will fight too hard to keep him.