While there hasn’t been any progress in the Miha Zajc to Huddersfield Town/Newcastle United story that emerged over the weekend, some extra details have been filtering through.

La Nazione are the ones pushing the story on Monday, seemingly confirming that both the Terriers and the Magpies are the two clubs after the Empoli midfielder’s services, who would be available at around €6m.

We already covered his agent’s comments on Sunday, who made it very clear his client could end up in the Premier League, and the aforementioned newspaper believe it would only take around £5.5m (around €6m).

They state that should the player’s representative come knocking on Empoli’s door with an offer of that amount and a contractual agreement, then the Serie A side could then ‘validate’ a transfer. 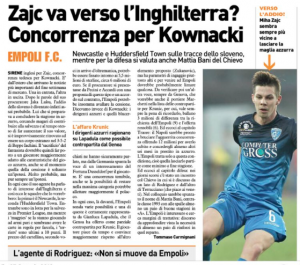 As things stand, it doesn’t seem like either Newcastle or Huddersfield have made a move, as La Nazione explain a sale, for now, is ‘very probable, but still hypothetical’.