Juventus are eyeing up a swap deal with Paris Saint Germain that would see them sign Leandro Paredes in exchange for Moise Kean, who they would buy a year early from Everton.

That’s according to Gazzetta Dello Sport, who say the Toffees could be set to miss out on the €4m they’re owed for the second year of Kean’s loan deal in Turin.

The striker returned to his former club last summer on a two-year loan deal that saw them paying €3m in the first year, €4m in the second and then a compulsory €28m at the end of that second season.

Juventus, though, have changed their mind on the Italian and no longer want him, so have been trying to work out how to resolve the situation.

They really don’t want to pay the second €4m payment, and Gazzetta now say they may have figured out a way to do it.

According to them, Juventus’ idea is to propose a swap deal with PSG for midfielder Paredes that would see Kean go the other way.

That’s seen as a ‘bargain’ for both clubs from an economic point of view, particularly for Juventus, who would save €4m for loaning Kean from Everton for a second year.

This equal exchange, valuing both players at €30m, would allow PSG to get the reserve striker they’re looking for and also get Juve the midfielder that Max Allegri wants. 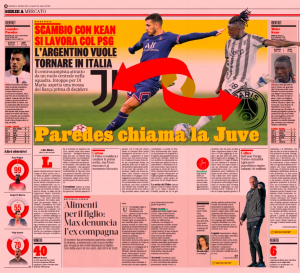 It will, however, require an agreement from Everton, who have so far resisted any attempts by their Italian counterparts to modify the deal they agreed.

They want both the €4m for the loan and the €28m purchase fee and see no reason why they should give up the former at this moment in time.

Of course, with finances tight at Goodison Park, perhaps they will decide getting that €28m now rather than next year would be worth sacrificing €4m this year.

Until that point, though, Juventus will be keeping Kean, regardless of potential swap deals with PSG being lined up.