While the vast majority of the Italian media were more concerned about Nicolò Zaniolo on Monday in their AS Roma sections, Il Tempo dedicate the whole page to Chris Smalling.

The local newspaper explain the Serie A club are throwing ‘everything’ on the England international at the request of their manager, Paulo Fonseca, with the player having already given his OK to the transfer.

The new owner, Dan Friedkin, and his son Ryan have both agreed that signing the Manchester United defender is the right move, and have given their CEO, Guido Fienga, the objective of ‘finalising the negotiations’ for Smalling.

The lack of decent options in the centre of his defence led Fonseca to urge everyone above him to go after Smalling, and Roma have now given the dossier to a new intermediary, who isn’t the one who helped with last year’s loan. 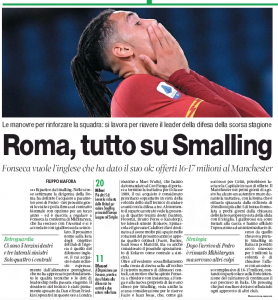 Roma’s plan is to try and convince Manchester United with a ‘complete expenditure’ of around €16-17m, counting ‘strongly’ on the player’s desire to return to Italy instead of staying at Manchester United.

Something is bound to give at some point down Ed Woodward’s end, but to convince the Old Trafford chief, there might be a need for a couple extra million.