AS Monaco want to sign an experienced central defender, explain L’Equipe… and do so before the end of the week.

The French principality club are in trouble this season and manager Thierry Henry is trying to steer them away from a real relegation battle.

For this purpose, Monaco are ditching their long term transfer policy of signing young players to develop, and instead going for experience.

A man who fits the requirements in central defence is Crystal Palace’s Mamadou Sakho. The 28 year old has a contract with his club lasting until June 2021, and it’s explained Monaco are ready to pay a ‘nice transfer fee’ to get a deal done. 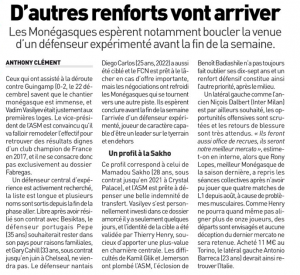 Crucially, L’Equipe don’t say what Monaco consider such an amount to be, and there’s a good chance it would differ from what Crystal Palace would see as something good.

The English club are hardly going to endanger their won future to help out Monaco, unless they’re offered something which is truly too good to refuse.