If Juventus do end up appointing Maurizio Sarri this summer, Napoli are faced with a huge issue: needing to beat their former manager.

As we all know, Aurelio de Laurentiis is a proud man, and should the top team in the league end up with his ex-employee at the helm, he will do everything in his power to stop him from achieving his goals.

With that in mind, the idea of signing Manchester United’s Romelu Lukaku appears to be growing by the day, with the player seen as the ‘exact’ profile Carlo Ancelotti is looking for to spearhead his attack.

However, one thing stands in their way: the Red Devils.

Not because of the price, but because the Belgium international, Gazzetta dello Sport report, is still ‘not on the market’. 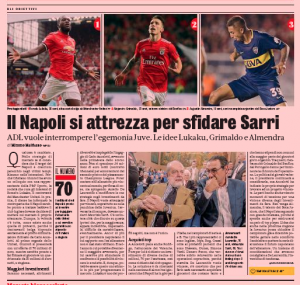 Why that is isn’t explained, but it could simply be that Ole Gunnar Solskjaer wants a replacement sorted before letting the 26-year-old go.

While everyone else around Europe appears to think Lukaku is already up for sale, it appears Napoli have been told differently after Cristiano Giuntoli, their director of football, let the player’s agency know they were ‘ready’ to put €70m on the table for the goalscorer.

On top of that, the Serie A club would be prepared to offer the former Everton star a four-year €10m/season contract, taking their expenditure over the deal’s length to €110m.

It’s an investment Napoli are prepared to make to try and stop Juventus from winning yet another Serie A title.

Gazzetta explain that as soon as Manchester United give the ‘first signal’ Lukaku can be bought, Giuntoli will present the €70m bid to Ed Woodward and co. in order to convince them to let their striker go.

As for how Napoli could afford all this when they’ve never spent such an amount on a player in the past, all of that was explained on Wednesday (spoiler alert: the government could end up helping them).